From the time I was a little girl, I loved to be outside. Spring was one of my favorite times of the year!  Having grown up in a small Midwest town in Quincy, Illinois, Winters seemed exceptional long and especially cold. The intermittent years that would grace us with beautiful snowfalls covering the ground in which we would construct snow forts for snowballing, building snowmen and sled riding, not to mention the hours of ice skating at Berrian Park, time stood still,  taking forever to pass until the beginning of Spring.

I was always a very curious little girl, who loved to read, was somewhat of a loner, painfully shy.  I had no problem puttering around by myself. My Dad’s nickname for me was “Piddlepot”, ironically.  I had friends, a select few who included the neighborhood block kids, “The Briddles”,  who became just like an extension to my two sisters and three brothers. We would play hide and seek, baseball, tennis, tackle football , we were all inseparable during the summer months, it was so much fun. Simpler times, our world was very small, naive and truly sheltered with simplicity. Having a vivid imagination and a propensity for sensitivity that comes hand and hand with introverts, that has literally formed me as an artist today. From the time I was seven or eight  years old until I became a Freshman in high school, one of the greatest highlights of my Spring and Summer months was the trips I would make to the Covert Farm outside of Carthage Illinois. It was there that my fascination for gardening and growing things, the smell of freshly turned rich dark earth, the excitement of seeds sprouting, leaves growing, vegetables producing,  became a real source of a completely different world than what I was used to growing up in the “city”.  I learned to forage for blackberries, raspberries, wild strawberry’s. That you could make apple butter in a copper pot outside over a fire in the Fall. Not to mention feeding hogs, chickens and cattle, and how to chase to the menagerie of farm cats who were critical “workers” of their own at the farm. My first horseback ride was at that farm, bareback, ten years old clinging to a bucking horse not ridden in years on a ten minute ride for my life.  Complete with being neatly dumped on the hardest ground I’ve ever felt.   I was a city girl who longed to be a country girl. Sleeping with the windows wide open, hearing the crickets and night sounds, seeing the flashing lightening bugs compared to the early morning sounds of the farm coming to life for another day and the clean fresh smell of Summer, I was in heaven.

It was peaceful and had it’s own unique and individual aura. It was truly the definition of what today’s world calls the Farm to Table movement. Food was crafted from scratch, fresh ingredients either fresh from the garden, canned for preservation or frozen, I learned the unique difference between store bought and farm grown tastes. I also learned to sew and create with my hands, I learned the value of never throwing anything away that could potentially be used in another creation. I remember the look and feel of Grandma Beeler’s house in Tioga,Illinois, her simple furniture, little white house with grey porch floors, that in today’s world would  be defined as the movement called “shabby chic”. She was truly an heirloom of information in ability, presence  and craft. An icon of simpler times that unknown to all of us at that time, would create a lasting impression of desire for just that and a beautiful gift to “create the world we wish to live in”. 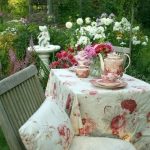 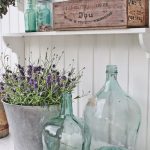 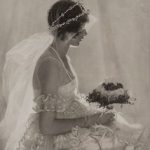